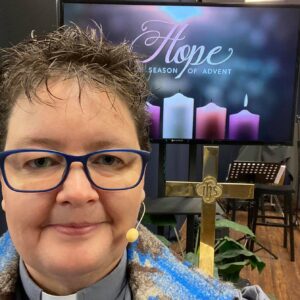 Some people knew very early in life what they wanted to be when they grew up. Jenny is NOT on of those people. Her path has led through different places and a variety of occupations, including retail management, journalism, marketing, teaching, and even middle school administration. Today, the bivocational pastor works full time as a document specialist for an international medical supply company.

Even before coming out as an adult in late 2003, Jenny felt the sting of church rejection. Trying to operate as an LGBTQ member of a “welcoming” church essentially led to some serious deconstruction that has taken years — and continues. Along the way, Jenny has learned that the best growth and most abundant life she has experienced comes not in finding specific answers to be “right,” but in embracing the questions. “Sometimes,” she says, “It’s just more fun to wonder than it is to know for sure.”

Jenny and her wife, Cindy, have been together since 2004, and married since it became legal in 2014. Cindy is an over-the-road truck driver who makes appearances at Evolve whenever she’s back in town.

Carl and Lori Higgins have been in ministry for over 25 years and have served as youth pastors, associate pastors and senior pastors at several Oklahoma churches. They have been married 29 years and have 2 grown kids.

Carl serves as Associate Pastor and occasional guitar player while Lori is our Praise and Worship leader. They are passionate about helping people realize and fulfill their purpose for God’s kingdom. They are also called to help heal those who have been burnt by life, and shunned by religion.  They believe God loves us as we are and desires relationship with all his children.

Carl, Lori and Pastor Jenny go back more than 15 years as friends and ministry partners.